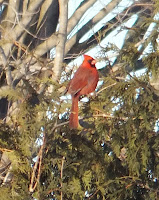 Walking along the back of the berm today I came across this cardinal perched on a cedar hedge along the fence. He was busily chirping away in counter point to another cardinal somewhere behind me. I hadn't recognized his song initially because it was just a modest chirp echoing the other cardinal not a lusty multi-syllable song like I am used to in the spring time. So I checked the internet about the significance of cardinal songs and came across an extract from Gary Ritchison's book on the Northern Cardinal that might explain something of their behaviour.

According to Ritchison in January and February young males will practice parts of songs that they hear from other male cardinals. They perch lower to the ground in bushes and don't sing too loudly while practicing. This behaviour is called subsong. As the days get longer the birds will have perfected their song and then they go up to the highest perches and sing loudly their repertoire. When they hear another cardinal they respond by countersinging where the two cardinals take turns singing their songs. Sometimes a cardinal matches the song of the other cardinal, perhaps to tell him that his response is directed at that cardinal in particular. I wonder if there is a bit of competition to it where the cardinal that can first learn the other cardinal's song "wins". It sounds plausible and would explain why cardinals produce such elaborate songs and why there tends to be regional dialects. According to Ritchison, cardinal songs have regional dialects where birds of the same region have similar repetoires but the further away two bird's home territories are the less their repetoires will overlap. (Link to The Northern Cardinal by Gary Ritchison)

So perhaps these two birds weren't really ready to start establishing territories as it is still only February but they happened to be close to each other and they got into a bit of a competition countersinging their subsong chirps. Either that or we have particularly unimaginative cardinals here in Manordale.
Posted by dfg at 3:25 PM