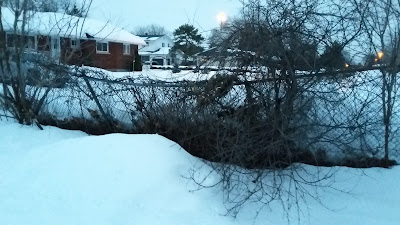 The old tumble-down fence at the end of Newhaven St. is, I believe, quite unique in Ottawa. It is the only dead-end in all of Ottawa where access is blocked to city owned open green space. I asked Keith Egli, the city councilor, about opening an access point there, so that people might have a convenient place to walk. He in turn asked the city staff and they said no-can-do. Why you might ask, well according to the accessibility rules they can't just remove a fence to allow people to access the green space without making it wheelchair accessible. To make it wheelchair accessible would require they create a paved path, and there isn't the money for that.

I wouldn't really want a paved path there either because, in order to connect it to the multi-user path on the other side of the berm, you would have plow a hole through the berm. If this was a new subdivision, I'm sure a fence would never have been installed there in the first place, the fence however was errected back in the 60s when Manordale bordered the experimental farm so we are stuck with it I guess. As you can see, the snowplows damaged the fence a few years ago and nobody has bothered to repair it. That doesn't really speak very highly of the civic pride in Manordale, but it is a bit of an orphaned fence that nobody really has a use for anymore.

There is something ironic about the accessibility rules preventing accessibility. There is another head-scratcher at the end of Cheryl road. There they have relatively recently put in a paved path along the hydro easement but failed to make it conveniently wheelchair accessible from Cheryl by leaving a rough patch of gravel between the paved surface of the road and the paved surface of the multi-user path. I'm sure there is some sort of rule there where they need a curb to divide the road from the path and as the end of the road is unfinished they couldn't pave up to a curb. Nothing is ever simple in government.