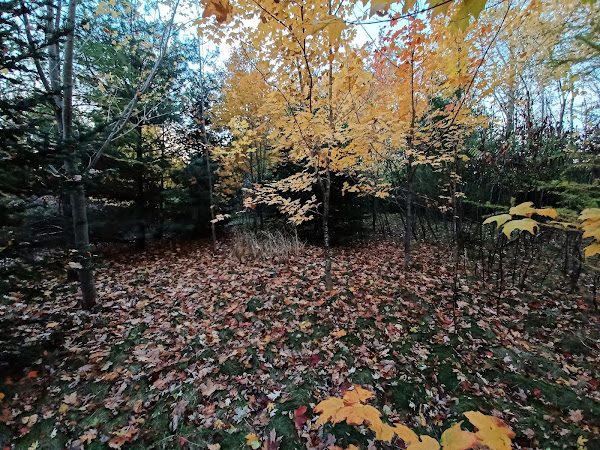 The trees in the 2009 and 2010 planting areas have grown up and together this summer and it is starting to feel like a part of the forest now. There are a few open areas where the grass is holding on but under the thicker canopy and the evergreens the grass is pretty sparse. The 2011 and 2013 planting areas are still very open. Many of the seedlings planted by the cub scouts had a good year and are getting to be able to hold their own against the grasses and vetch.

I haven't made any posts to this blog this summer as I was unhappy with the camera on my old phone, so the following are some notes about the summer that never made it into a post:

Red in Beak and Claw? 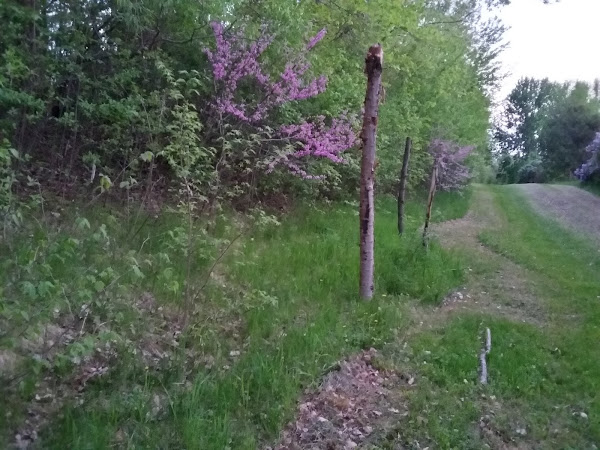 Last weekend I planted a couple of baby trees I rescued from the garden. The trees are very small, the stakes are very large. Good thing I put the stakes in right away as the next day the mower came by. This part of the north side of the berm was originally planted by the school children 12 years ago but the mower accidentally cut down about a dozen trees a couple of years later before they realized what they were doing. Some trees and bushes started to regrow from the stumps so I planted one six foot high stake at the edge of the tree planting area to indicate where the trees were regrowing. The north side of the berm only gets mowed a couple of times a year so it has to be a pretty substantial stake for the mowers to see it. Unfortunately over the years sometimes the mower would consider it a challenge and squeeze between the stake and the trees, again cutting down the saplings that were valiantly trying to recover. There is still one hazel bush that I recognize as from the original planting as well as a few other volunteers that are growing from seed.

The other day as I was coming back from watering the trees I started to pull away in my car when I noticed a crow was fighting in mid-air with some sort of bird in front of me. I stopped and decided to intervene to save the poor bird that was by then on the ground with the crow on top of it. Before I even got out of the car a red wing black bird dove down onto the crow distracting him. I then got there and the crow flew up into the bushes where one of his mates was looking on. I could then see that its victim was a small baltimore oriole that was sitting in a depression in the grass, clearly injured from the attack. He didn't move when I approached and I didn't know what to do. I thought of taking him to the Wild Bird Center that is off Moodie but I was afraid that he would injure himself further if I attempted to pick him up and I didn't have anything to carry him in. I could tell he was quite alert even though he wasn't moving, but those crows were right above watching us and I was in a bit of a quandary about what to do. Eventually those two crows flew off while I was scratching my head. Then the oriole took the dilemma out of my hands and ran off into the bushes when I briefly turned my back. I guess in his eyes I wasn't anymore a friend than those mean crows.

I sure hope the little guy wasn't too badly injured and is able to recover. The brief episode from start to finish probably wasn't more than a couple of minutes, but I think it will stick with me for quite some time. What strikes me as remarkable is how both the red-wing blackbird and I reacted in essentially the same way to the suffering of an individual from a different species. Who is to say the red-wing blackbird didn't also feel empathy for the poor oriole? 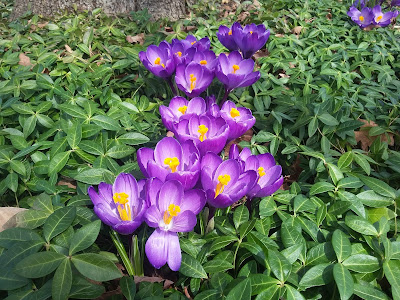 It was a pretty mild winter this year without any particularly severe cold snaps and without any thaws either. After a green Christmas we had a good blanket of snow shielding the ground all through January and February. Now soneone has flipped the switch and spring is running at full speed. 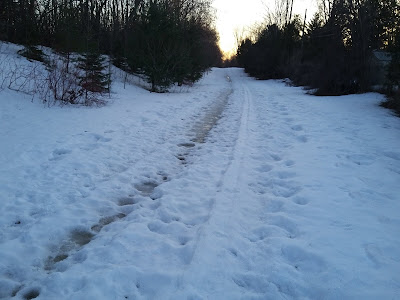 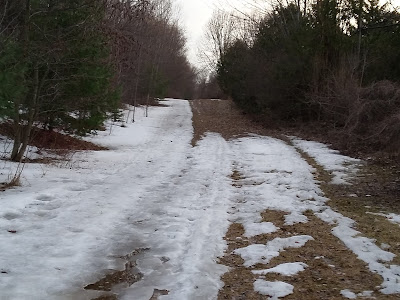 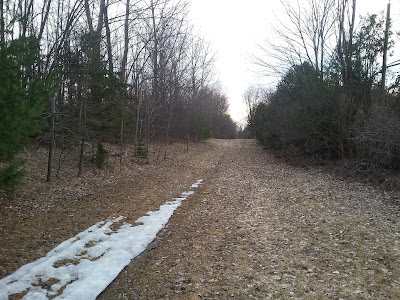 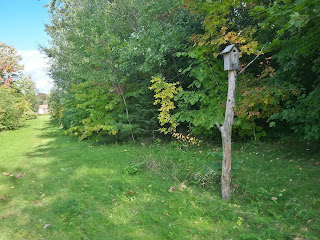 The other evening I was walking by this birdhouse and saw a downy woodpecker poking its head out of the hole. It is the second time I've seen a downy woodpecker around this birdhouse in the evening so I guess it is one of their regular roosting holes. I always think of birdhouses as places for nesting in the summer and forget some birds also need places to shelter at other times of the year. This is a daytime picture from earlier in the year of course, as it was too dark to get a good picture. 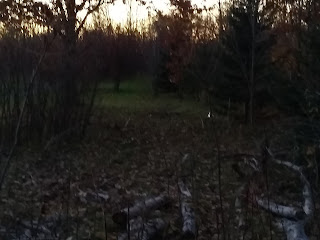 A few weeks ago the mower took a swath out of the 2010 bush are. I don't know what the mower was thinking, perhaps he remembered an old path that went aproximately that way but that path hasn't been mowed in five years and was thoroughly filled in by the sumac. There were a few elderberry and nannyberry bushes planted there that were struggling amongst the sumac, perhaps they will come back stronger. 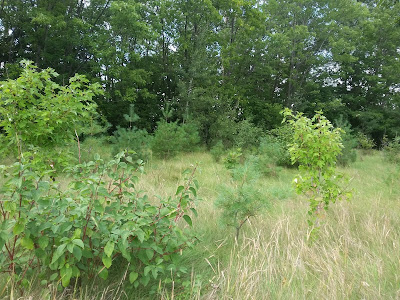 We had a dry June and July but we have had a few good rains in August and the grass has greened back up. The picture above is of the 2013 planting area. The seedling pine trees that were planted there 6 or 7 years ago, are now about 6 feet tall. Some of the burr oaks (picture below) are also about that tall while other are still fighting with the grass.

Grass still dominates the 2011 and 2013 planting areas but has grown sparse in the 2010 and 2009 planting areas where the sumac and trees have formed a continuous canopy. The grass is still holding on underneath the sumac and in clearings but some perennial old-field plants like goldenrod, milkweed and thistle that had established themselves in the 2009 area are now losing ground. 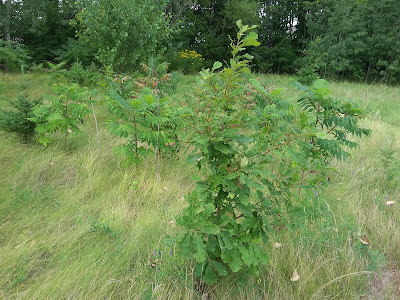 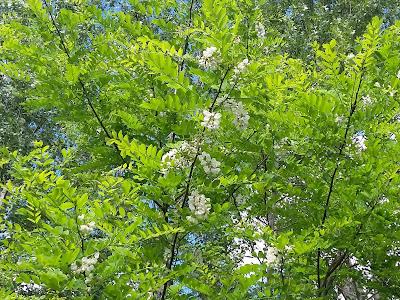 Aunt Pat's Black Locust bloomed for the first time this year. It is five years since I transplanted it from her home in Curry Hill and it has turned into a handsome tree. 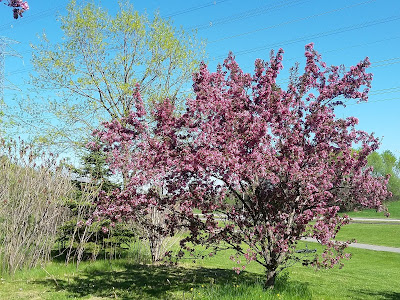 A couple of Baltimore Orioles flew out of this lovely crabapple. I attempted to take a picture of them as they were hopping around in the bushes but all I got were flashes of orange in leafy green. It is interesting how you can see things much more clearly in real life than in a photo. It isn't just a matter of pixels, "seeing" is more interactive than "looking". You change your focus of attention, you use your depth perception, you move your head to parallax shift thing that are in the way, all in order to construct an image in your mind of the item that has attracted your attention. 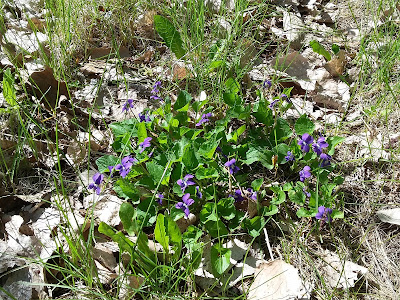 I've been noticing these violets along my path for about a decade now. The mowers abandoned their strip around the 1995 planting area over 5 years ago, and now the sumac are starting to overgrow the path yet the violets persist. The trilliums and bloodroot I planted that are a few steps away from these violets inside the forest are still there. They have hardly expanded there presence. I think there were 6 trilliums this year, before the rabbit tax. Time moves at a more sedate pace for plants.