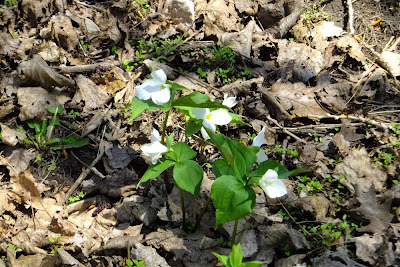 The trilliums are just about over for another year. Above is a picture of some of the trilliums we transplanted to the 1995 tree area in 2009. This clump and the clump of bloodroot transplanted at the same time are only slowly expanding.

There is an ash tree close to the trilliums that I have suspected for a while was suffering from emerald ash borer. The winter before last I saw a hole which looked like a woodpecker had been feeding on the tree and last year it only had a sparse canopy. This year while visiting the trilliums I noticed that there are several of the D shaped holes (see below) in the trunk that Emerald Ash Borers make when they emerge as adults from the tree. 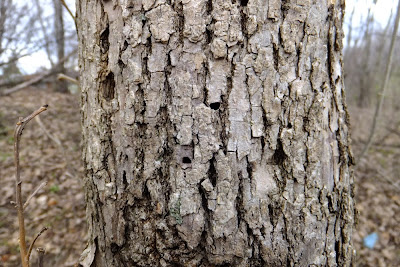 This spring the only signs of life on this tree are on the shoots coming up from the base. Presumably the emerald ash borers have completely girdled the trunk of the tree. The shoots at the base of the tree are another indication that the tree is under attack, but I probably should use the past tense as once you see the exit holes the emerald ash borers have done their work and have already left. 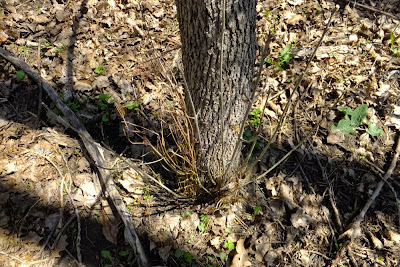 On the berm beside Huntclub these are the first definite signs I've seen of Emerald Ash Borer but last year the damage from the ash borers really became noticeable in this part of the city. There was a whole line of dead ash trees on Baseline and some dead trees along Woodroffe.