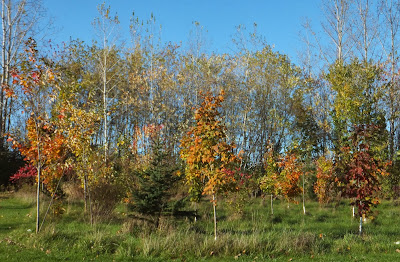 Five summers after being planted, the trees have grown. Many of them have outgrown their white plastic trunk protectors. I've taken quite a few off that were tight and we'll see how the trees do without them. Below is an image of the trunk of one maple tree that got attacked by the field mice last winter. The ant is crossing the new growth that has partially filled in the wound. The tree had a plastic trunk protector on but it didn't stop the rodent. I'm going on the theory that at a certain point, the bark gets so thick that rodents no longer find the older trees very tasty. When the spirals are removed though, the trunk that was protected looks younger than the parts of the trunk that had been exposed to the weather so I am a bit worried that the field mice will attack the trees that have been newly uncovered. 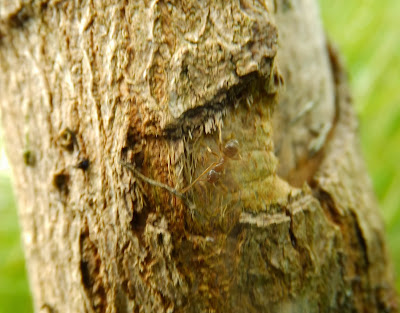 A few weeks ago I was walking through the tall grass along the berm west of the 2011 planting area and I noticed that the boy scouts had planted quite a few seedlings in the area. The tall grass hadn't been cut all year and I wondered if that meant the city had given the boy scouts permission to plant there and that it was to be an expansion of the naturalization area. Unfortunately it was not to be, for only a few day later the mower came along and cut down the long grass and the couple of dozen seedlings that had survived the summer there. There are about a couple of dozen other seedlings still surviving in the 2011 planting area. The seedlings were quite small and the vetch grew very quickly, so many of them got crowded out. The boy scouts planted a lot of white pine and a few deciduous trees I had a hard time identifying. I'm fairly confident that I have the two new tree species identified now (see pictures below). 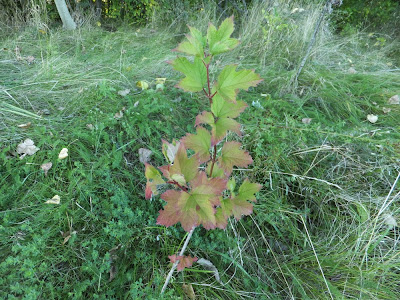 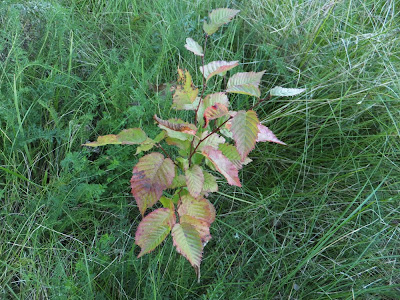 I noticed on my walk a single dog-strangling vine about 75m from the west end of the 2011 planting area. It is spreading from the infestation that is further west along the berm. I attacked that patch this spring while the young vines were still easy to pull out. That measure seemed to be effective as the plants didn't come back but there were more of them in the shade of the trees that I didn't get to so it was really just a delaying tactic. I read in the paper that scientists in Ottawa are releasing a biological control agent that is specific for dog strangling vine. I hope it is effective; I wouldn't want all the wild places of Ottawa to turn into the Fletcher Wildlife Garden. 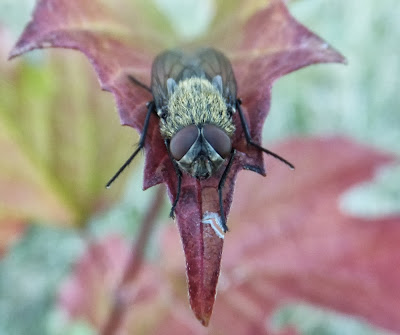 A Cluster Fly (Genus Pollenia) resting on a highbush cranberry.