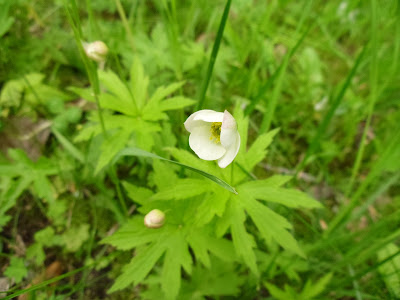 I came across a little bunch of Canada Anemone in a wet rut on the north side of the berm. A couple of years ago a hydro truck came along to clear branches from the hydro lines. It must have been quite wet as it left deep ruts that are still present to this day. The anemone are not far from a new patch of Dog Strangling Vine I found. The first plant of this new patch got established under a bush about 30m east of the patch at the end of Newhaven. I've attacked the Newhaven DSV patch a couple of times this year already. It is still as strong as when I first noticed it, but I don't think the patch has expanded noticeably except to this new satellite patch. 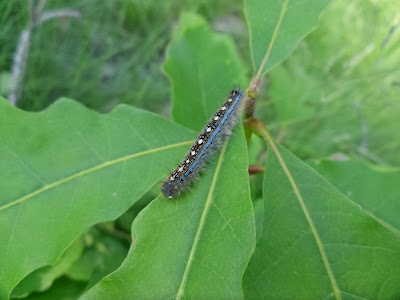 This spring I've noticed a lot of tent caterpillars like this one that I found hanging out on a young bur oak in the 2013 planting area. They are quite pretty when viewed singly but have the annoying habit at this time of year of hanging from a thread at head height. I was biking through a forest south of Calabogie a couple of weeks ago and they kept on landing on my baseball cap.