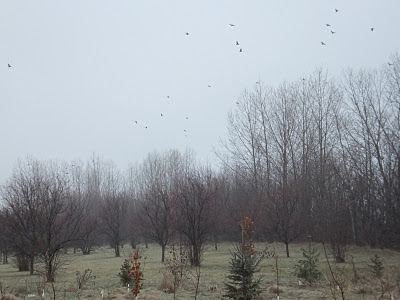 It was an icy day on the 21st when I took the above picture. You can see the crows are still passing by every evening on their way east. Not in as large numbers as before, perhaps a couple of hundred crows flew over my head as I was visiting the trees. Not much was moving on that icy day except the cars and the crows. Crows fly at about 40km/hr so they may have been the faster of the two. I hope the city didn't put salt on the roads or else it was just the sort of weather for the spray from the road to mingle with the misty freezing rain and cling to every surface of the trees. Hopefully the heavy rain that finished the day washed it all away.

It was looking like it was going to be a green Christmas until this morning of the 23rd when a light dusting of snow covered the ground. We just got the south western edge of a snowstorm set to hit the Maritimes tonight.
Posted by dfg at 1:48 PM 1 comment: 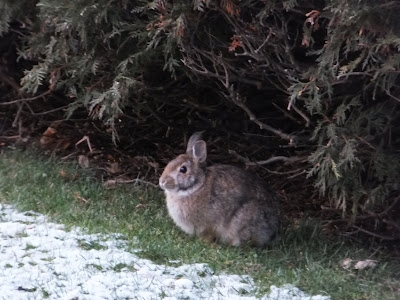 Crows and geese aren't the only creatures of habit that can be found regularly in the same spot. Rabbits also have their favourite spots. Take for instance this rabbit I passed along Kimdale St. yesterday. He must really like that hole in the cedar hedge because I took the below picture of him at the same spot 10 days earlier. 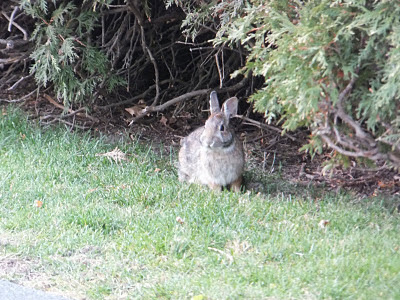 One thing I've noticed this past year is that there hasn't been rabbits in residence on the eastern side of the triangle area. Last year and the year before I regularly passed a pair of rabbits hanging out at the end of Kimdale St. and then would spot another rabbit along the path at the north eastern corner of the square. Not to say that there are no rabbits around, just that their regular hangout spots aren't the same as before. For instance, there were quite regularly some rabbits hanging out along the forest edge by the crab apples this past summer.

Cottontail rabbits are a relative newcomer to the area. 25 years ago there weren't any around. I remember going to the University in Waterloo in the early 90s and being excited to see all the rabbits on campus. They started appearing in the Manordale area in the 90s and quickly became quite common. As I understand it, there are several species of cottontail rabbits. Ottawa is on the very northern edge of the eastern cottontail range. The Fletcher wildlife garden has a good page describing the habits of our rabbits.
Posted by dfg at 2:17 PM 1 comment: