I wanted to see some bats this year so I decided to stay out on the berm this evening. It didn't get dark enough until around 9:30 and the mosquitoes kept me on the move walking around the berm area. The mosquitoes are pretty bad this year, fortunately I can tolerate being bitten as my skin doesn't react very much to mosquito bites. I noticed a few june bugs that would make a good meal for a bat. They seem to like to hover around the young maples along the edge of the 2009 planting area. I eventually saw a couple of bats swooping around and then hurried back home to get away from the mosquitoes. On the way back I spotted some fireflies hanging out in the long grass. I don't think I have noticed them in previous years so that was some reward for my patience (and blood) in staying out til dusk.
Posted by dfg at 7:28 PM 1 comment: 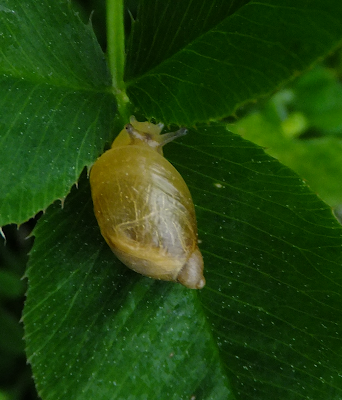 There has been a population explosion of amber snails in the 2009 tree area. They are climbing all over the grass and meadow plants. There are so many you have to watch where you step. It's strange that they only seem to be in that area and in the adjacent bushy area. There is no noticeable concentration in the 2010 or 2011 or 2013 areas or in the grass across the road. I tried to estimate how many there must be in the concentration by counting the number in three test areas chosen at random. In one one meter square area in the strip normally mowed but not yet cut this year (close to the forest) there were 23 snails, in a second in the bushy area there were 50 and in a third in the 2009 area there were 10. The total area is about 2000 square meters so there are probably tens of thousands of amber snails climbing all over the meadow. One that climbed to the top of the flowering kentucky bluegrass. In the background are two snails that might be mating. 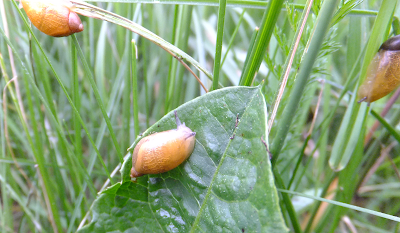 A fairly clear picture of one on a dandelion leaf. 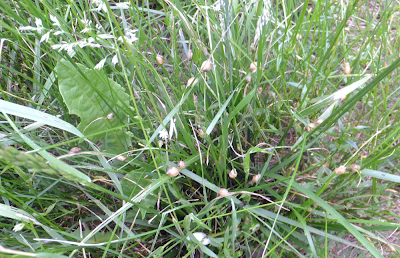 A whole group at one of their typical hangout spots: a clump of fescue.