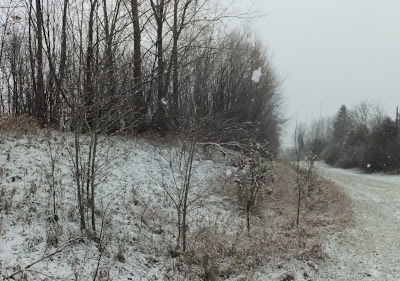 Today is the earliest sunset of the year. Hopefully yesterday's snowfall stays around to brighten up the rest of the winter. I only learned last year that the length of the solar day varies over the course of a year due to the earth's axial tilt to the celestial equator. The solar apparent noon varies by as much as 16 minutes from noon over a semiannual cycle. In Ottawa, in November the solar noon is about a quarter of an hour before noon while in February it is about a quarter of an hour after noon. At the equator where there is always about 12 hours of sunlight, the earliest sunset occurs in early November, but because our hours of sunlight, this far north, are still shortening in November sunset continues to get earlier and earlier even as solar noon moves back towards the clock noon.

In the foreground of the above picture you can see several clumps of poplars that have sprung up on the north slope of the berm. These suckers have grown about 20 feet over the past four summers since the mower was banished from the slope. They are already starting to shade the trees planted on the slope in 2009. The planted trees may have to put up with some shade for a couple of decades, but that is the way of natural succession. The sugar maples will still be relatively spindly in 20 years time. The ones planted in 1995 still look like they could be toppled by a couple of blows with a good sharp ax. Poplars are very fast growing but short lived trees. you can see in the background of the above picture one of the parent poplars, planted in 1995, had already grown into a large substantial tree before it was blown down by a wind storm this summer.