Marching into the sunset

I have a new Fuji F550 camera that I'm still learning how to use. Here is the best picture I took today of the pylons marching into the sunset. It is surprisingly difficult to get the colours right. The pink of the sky is about right but the ground wasn't as dark as it looks.

These pylons are actually quite impressive if you think about them. They're about 150ft high and 200 to 300m apart. That means there are over a thousand transmission towers involved in carrying the electricity from the nearest large power plant to Ottawa. They carry the main 500kV transmission lines from the Lennox generating station into Ottawa. They also carry an older 230kV transmission line that goes on a more direct route through Almonte from Toronto to Ottawa. A third more local distribution line carries power at 115kV to Kanata.(map pdf)
Posted by dfg at 3:07 PM 1 comment:

Crows have been congregating along Hunt Club for the past few days. This is the third year I have noticed them about this time of year. The above picture is just a small fraction of the flock. I could see over 500 crows all at one time resting in the branches of the woodlot south of Hunt Club and more were coming and going all the time. They were flying south east from Ben Franklin Park to the woodlot in the experimental farm and then leaving the woodlot at the east end.

Yesterday was the first significant snowfall of the season and today when I visited the berm area the square that was planted in 2009 was covered with crow tracks. They had been looking for food and you can see in the picture below where one of them has stripped bark of a dead tree looking for a meal. 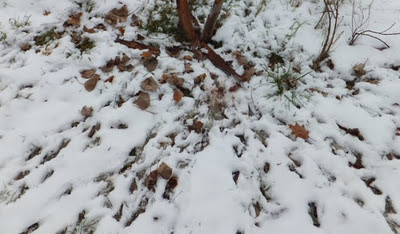 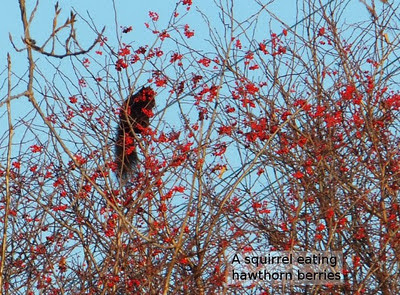 I went for a walk with my new camera to see what I could photograph on this nice sunny day. Here is a squirrel eating a hawthorn berry. There are three types of hawthorns growing on the south east corner of the triangle area. Here the squirrel is having a meal of washington hawthorn berries. Below is a closeup of the berries. They are quite juicy and unlike the other hawthorn berries (haws) that have flesh more like a berry than an apple. They grow in umbles of small berries with multiple seed segments in the center of the berry. They are supposed to be edible but not very tasty. 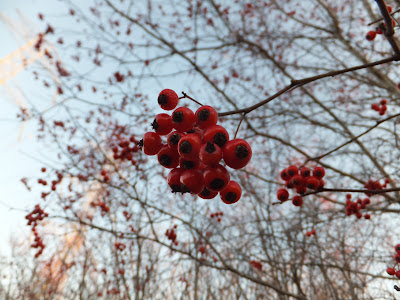 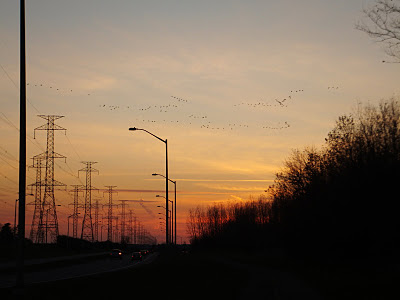 Thousands of Canada Geese have been flying overhead every evening for the past few weeks. They eat their dinner in the fields of the experimental farm and then go roost along the Ottawa river. This migration is an incredible sight and I am always amazed how much we ignore it. Sometimes along Hunt Club road, wave after wave of geese in their thousands can be seen flying over in just a couple of minutes and no one bats an eye. This didn't happen 30 years ago when I was young. You just didn't see the geese hanging out in the fields around Ottawa. There also weren't any resident Canada geese in the parks and beeches back then. This recovery in the numbers of geese has been incredible. According to the Ottawa Duck Club they helped introduce Canada geese back to the Ottawa area by bringing some from the Morrisburg bird sanctuary to the Shirley's Bay reserve in the 70s. Presumably this was a resident flock that then went on to stay and multiply in the area.

According to the net the sub species of Canada Geese that tends to be resident year round in the south is the Giant Canada Goose. It was thought to be extinct in the late 50s but a small population was discovered that was then bred and used to repopulate the resident sub-species. Canada geese, I've learned, are highly variable in size with several sub-species. The sub-species are hard to tell apart but in general they are geographically based with different subspecies having different breeding grounds that they fly to year after year. The resident populations we have now that are undergoing a population explosion may not be the Giant Canada Goose but may instead be a mixed breed that was intentionally released after having been in captivity. Since the migratory path is passed down through the generations from parents to offspring as they lead their charges along the migration, the birds bred in captivity would have lost that history. The migratory sub-species we mainly have here in Ottawa would be the Atlantic sub-species that makes a round trip from Ungava in Northern Quebec down to the eastern seaboard around the Chesapeake Bay area. The Atlantic Canada Goose is also quite a large goose. Those that breed even further north and to the west can be even smaller.
Posted by dfg at 2:23 PM No comments: 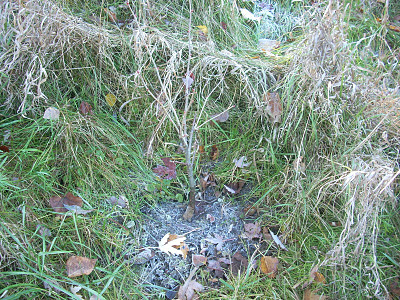 There was frost on the ground on the north slope even at midday yesterday. The above picture is of the linden tree that my Mom planted so it gets a little extra attention.
Posted by dfg at 9:10 AM No comments: