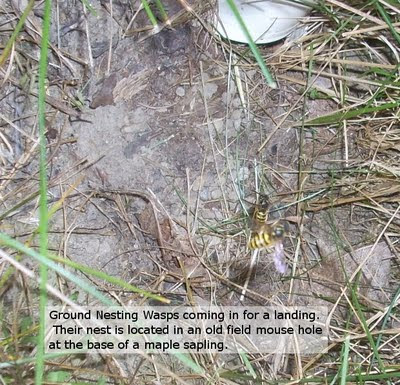 I noticed a couple of wasp nests recently. One is in a hole in the ground at the base of a maple tree. There were yellow jackets coming and going every other second. Some yellow jacket wasps make their nests in trees and some occupy a borrow in the ground made by some other animal. Judging by the number of yellow jackets coming and going from the nest the nest must be a substantial size. Wasps only occupy a nest for one year. The young fertilized queen over winters in a sheltered location in the earth or in a rotten log and starts their hive by themselves raising their first brood in the spring. Once the first brood is raised they start doing all the work taking care of the nest and foraging for food. The nest then grows quickly until by the end of summer there can be thousands of wasps in a nest. At the end of summer the next generation of fertile queens and male drones are produced and then the hive dies. 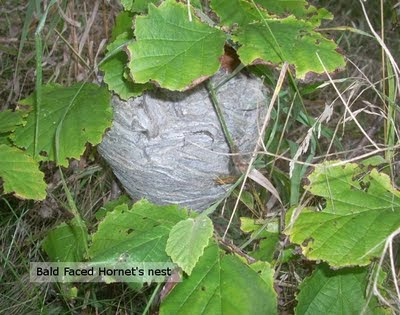 The bald faced hornet nest is always in a tree or somewhere above ground. They are quite a bit bigger than the yellow jackets being close to an inch long. I have never been stung by them and they don't seem to be too upset by me being close to their nest but they have a fierce reputation for defending their nests with a powerful sting. They are a type of wasp and have a similar life cycle of annually producing a new football sized nest with the hive dying out before winter comes. 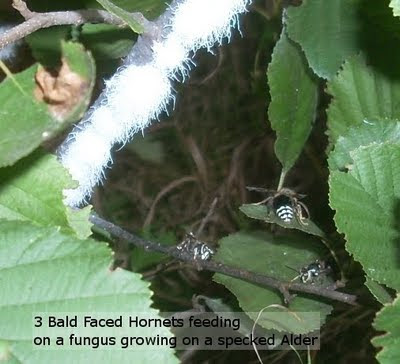 Above is a picture of three bald faced hornets feeding on some sort of powder coming off a white fungus. Yellow jackets were also vigorously coming and going from the trunk of this alder bush that was covered by this powdery and downy fungus. The wasps didn't seem to be feeding directly on the fungus but looked like they were licking the twigs close by. I suspect they like the taste of the spores that visibly covered the ground below the bush. Evidently according to various articles the adult wasps like sweet carbohydrate rich foods (such as soda pop) but that they are also predators attacking and killing insects that they then feed to the larvae. Interestingly, the larvae are suposed to secrete a carbohydrate rich nectar that the wasps then eat. 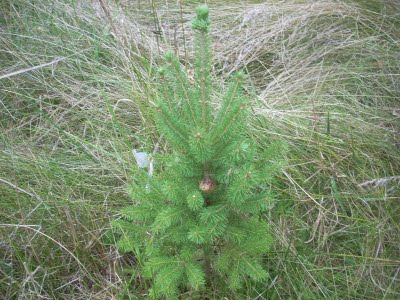 This spruce seedling was planted 3 years ago as a single sprig. It has come a long way and this year really grew well. It even had a set of buds that were formed this year open up for a second spurt of growth.

Halfway down the seedling you can see an egg sack of a yellow and black garden spider.
Posted by dfg at 5:35 PM No comments: 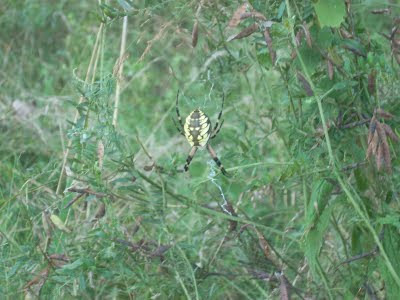 Walking through a late summer meadow one of the most common things you find are the webs of the Black and Yellow Garden Spider (Black and Yellow Argiope). These guys are pretty conspicuous. The web is a nice regular spiral design hung from tall shrubs or weeds. These big guys are easy to spot as they sit out in the middle of their web waiting for a grasshopper to get caught. The one above was about 2inches across with the thorax about as big as a large raspberry. I wouldn't want one of these guys crawling on me so I have to be careful to avoid walking through their webs.

The purple vetch is going to seed now with the goldenrod and queen anne's lace at their prime.
Posted by dfg at 6:02 PM No comments: