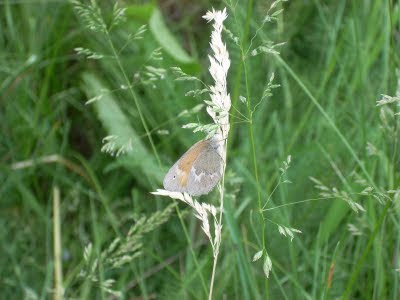 Here is a common butterfly found in early June flying around the square. They are a small brown nondescript butterfly commonly found in long grass in sunny areas. They are also called the Large Heath.

This spring the trees planted close to the road on the West Side had a really hard winter. In the front row were 4 maples and a fir tree. In the second row was a sumac, a hazel, a fir tree and two maples. Further back there was a couple of hackberries, a sumac, a linden and a gap where a couple of spruce trees had been that failed to successfully recover from the transplantation and where a couple of maples were cut down by some animal last summer.

In early May, only one of the maples in the front row looked alive. Three other small maples looked like they had been girdled by rodents. The fir tree in the front row looked healthy but there was no sign of bud growth. In the second row only the fir tree and one of the maples looked alive. Further back the linden and the sumac had a couple of buds each but the hackberries had not yet shown signs of life. On May 7th we planted a hackberry and an alder up front to replace the missing maples. At the time only 6 of the 14 named trees in the first four rows of the West Side showed signs of life.

One maple in the second row in particular was particularly worrisome. It had no rodent damage and it looked like it should have viable buds but there was no growth. Eventually on the 23rd of May I decided to take off the wrap around the trunk that protects it from rodents. Suprisingly there were tiny leaves growing on the trunk( first picture). A few days later I finally saw the fir tree in the front row showing green growth on the buds and noticed that a couple of the maples in the front row were regrowing from the roots (second picture is one of them from today).

Eventually the lindens started growing too. One of them in particular only showed green growth in June, again, only after I took the wrap off the trunk and found growth close to the base of the tree. As of today 11 of the 14 named trees are growing. One maple in the front row never recovered from the rodent damage, the hazel failed and one of the sumacs failed. The hazel is unsuprising as many of the hazels died or had severe die back over winter. However the sumac is the only instance I know of where a sumac died over winter. It demonstrates how difficult a location it is for trees. You can also see in neighbouring areas of the 1995 planting that the trees in the front directly exposed to the road are having a hard time surviving. You wouldn`t think that a road 25m away would have that large an impact on a tree but it dooes seem to be the case. 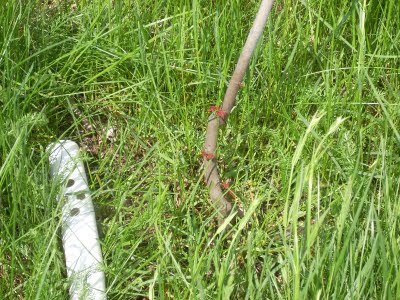 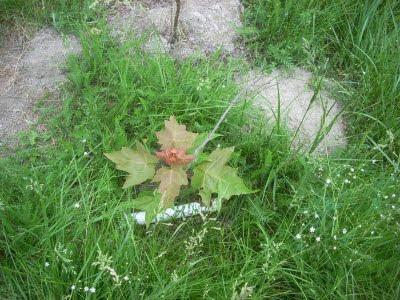 Noticed this guy hanging on the side of a branch of the large oak tree the other day. It was so well camouflaged I thought it was a bit of bark initially. He was a very large moth, and would be more than a mouthful for any bat. When I got back home I found him on the net as a Blinded Sphinx. What a great name for a moth. According to the article they like oak and popular trees so he should have been right at home on the berm.
Posted by dfg at 2:39 PM No comments: