A Couple of Fungal Diseases 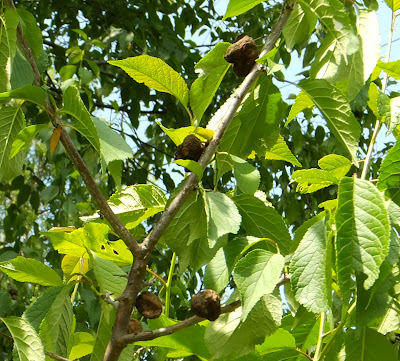 The Canada Plum bushes in the North-east corner of the berm area are infected with a fungal disease that causes their fruit to fail. The fungal infection causes their fruit to grow much larger than normal with a large hollow space where the seed should be. These hollow deformed plums that soon shrivel up are called plum pockets.

I don't know how this particular clump of trees got started as I have never seen them produce a viable plum and they seem to grow from suckers of the older trees. The clump may have been here a very long time; according to old aerial photographs hanging in the community center, the farmer whose land became Manordale had let a small clump of trees grow where Kimdale St. is located. At least one holdover from this woodlet is still there; between Ilkley Crescent and Kimdale Street there is a huge tree in a backyard that towers over the houses and the other trees. This clump of Canada Plums may have likewise grown back from the roots of a tree that had been in this woodlet some 50+ years ago. Once the field it is growing in became part of the Experimental Farm, this corner would have been left undisturbed, except by cows, for decades. Then in 1995 they created the West Hunt Club Road and the associated berm. The storm drain that is under the clump of Canada Plums was probably put in when they altered the natural drainage of the area with the berm. 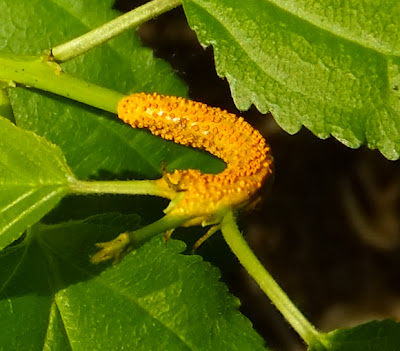 This bright orange growth that is deforming this buckthorn twig is actually a significant disease of oats, barley and other grasses. This oat crown rust fungal infection needs buckthorn in spring to complete its life cycle but then goes on to infect the alternate host which is a cereal or grass. The spots from this infection are quite commonly seen on the leaves of buckthorn but evidently doesn't do too much harm to the plant as buckthorn is a serious invasive problem for our forests.