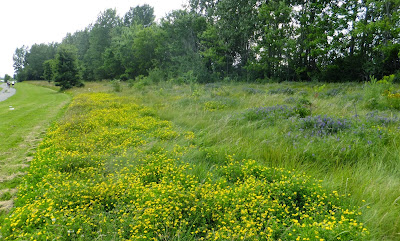 I find it very interesting how when the city stops mowing the grass there is a rapid succession of plants, first comes bird's foot trefoil then purple vetch and then the grass comes back as the dominant field plant again. I imagine there are further stages but I haven't encountered them yet.

In the above photo taken earlier this summer, you can still tell where the mower reached in 2011. This is a view along the edge of the 2011 planting area; in the summer of 2011 the mowers were guided by the easily visible newly planted trees. The city then put the naturalization area sign in later in the summer a few feet in front of the treed area. In the following years the mowers couldn't see the trees as easily because of the long grass and so took their cue from the location of the sign adding another broad swath of lawn to the uncut area. The strip in front of the tree planting area has since grown over in trefoil. In contrast, the 2011 tree planting area further back from the bike path has had four summers without mowing and is mostly past the trefoil stage and is now more dominated by purple vetch.

The 2009 tree planting area which is in its sixth year without mowing is mostly free of both trefoil and vetch; there the field areas are dominated by grasses again with the patches of sumac rapidly invading the open spaces. Some trees are tall enough to compete with the sumac but I have broken off some sumac stalks to let the light down to a couple of spruce trees that were becoming overgrown.