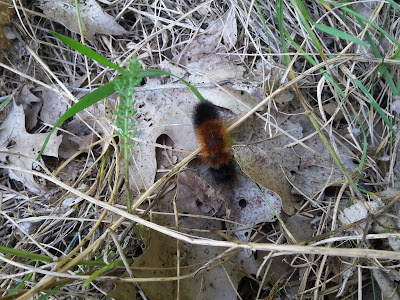 This was a good year for Woolly Bears. It was also a relatively good year for White Admiral and Monarch Butterflies. I saw a bunch of woolly bears on the trail up to Lusk Caves yesterday.

Bats aren't supposed to live in the Lusk Caves but even so the informational panel advised us to wash footwear and clothing to avoid spreading the White Nose Syndrome. I was happy to see a couple of bats along the berm earlier this year so I'll give those shoes a bleach treatment. Can't hurt.