The buds on many trees have been swelling this past week. The speckled alder gets a really early jump on the season. Their catkins are out. The catkins are developed in the fall but stay closed until spring when they swell up. A single catkin can produce a large amount of yellow powdery pollen. Close by the showy yellow pollen producing catkins are the much smaller fertile catkins that look like a very small red pine cone.
In the picture below there are some open yellow catkins, some brown catkins that are not yet open and above them on the same twig the small red pine cone like female flowers. There are also a few buds that are just about to open in the picture. The bud of the speckled alder stays covered in a protective brown covering until it is quite large (1cm long) and then opens up rapidly into a large toothed leaf. If you want to learn more this link contains more information. One interesting thing about the alder is that it fixes nitrogen and thus improves soil fertility. 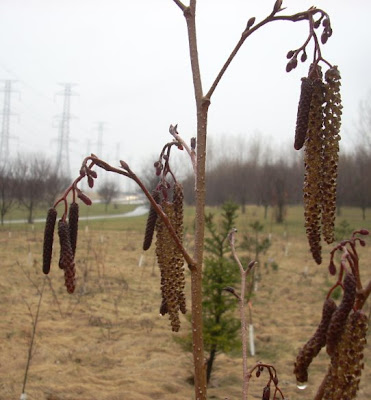