Rabbits and rodents aren't the only sources of winter damage for the trees on the berm. The spray from the road is also a problem. In winter the city occasionally puts salts on the road to keep ice from forming. The wind and the tires can then pick up this salty water and carry the spray over onto the trees. The trees closest to the road will get hit the hardest. This spring some of the small spruce seedlings seem to have gotten hit especially hard. It seems(See picture below) like on some of the seedlings the side facing the road got hit worse than the side away from the road.

The city forester said this is especially a problem for evergreen trees as they keep their foliage on through the winter and so it will get coated by the salty water. Other than the seedlings though the pine, spruce and fir trees don't seem too badly off. Perhaps I am wrong to ascribe the damage to salt spray. The trees are more than 10m from the road and there was little evidence on the snow of salt spray over the winter (you might expect sand and other particulates from the road to be blown with the spray). An alternative reason for the damage could be that the seedlings got too much sun. Many of the seedlings would have been partially shaded by the grass over the late summer and fall. Perhaps they weren't prepared for the intense sun when the grass was matted down by the snow. If the snow layer had been thick enough the snow would have covered the seedlings as well but last winter we did not get a lot of snow and the seedling spruce trees probably were poking out from the snow cover for much of the winter. 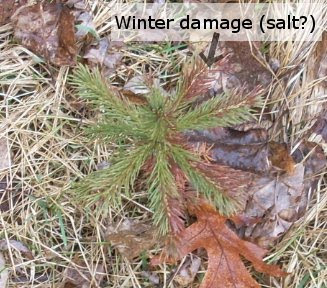