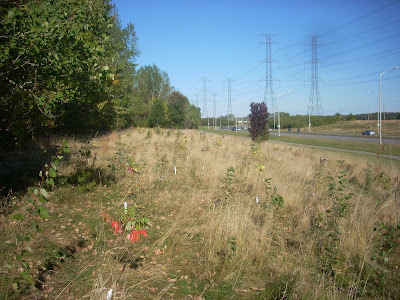 This year the naturalization area was extended to the area south of Kirkstall that was accessed from the end of Newhaven. The above picture is looking east from the west end of the new planting. The trees were planted on a warm dry day in a couple of hours and for the first two months there were very good prospects that most of the tree would survive. May was wet but not cold and June also had consistent rain. By mid June the grasses were tall and it was necessary to pull back the grass from the new trees.

July was hot and dry with some days in the high 30s. The only trees in the new area that didn't seem to suffer from the heat were the invading suckers from the adjacent poplars. The newly planted trees suffered under these conditions and by the end of July some of the new trees were losing their leaves. The burr oaks and the speckled alders in particular seem to not survive the dry conditions well. Some oaks survived better than others, about a third look like they are dead and the rest only look mostly dead.

The dry spell didn't end until halfway through August, but with the rain the temperature cooled and few of the new trees attempted to recover from the heat wave. The more established trees from the 2009 and 2010 plantings did not suffer very much from the heat wave at all. Even those newly planted trees that had a bit of shade did ok, but the Newhaven Extension area that had the south east facing hillside exposure, with poorly developed soil were hit hard.

Now in September I am spending some time preparing the new trees for winter. In order to minimize the loses due to field mice I am removing the mulch circles and pulling the grasses back from the base of the trees. The mulch circles hid a lot of problems. Quite a few trees are poorly planted, and the field mice are making themselves at home under the circles. Hopefully removing their cover will convince the field mice to not make their home under the new trees this winter.
Posted by dfg at 9:23 PM