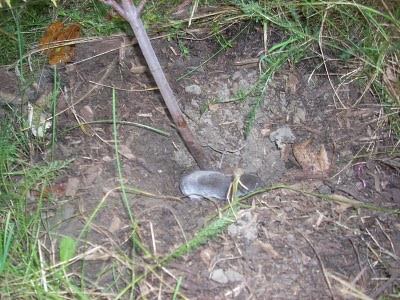 This past week I have been spending about an hour a day getting the trees planted this spring ready for winter. That involves pulling back the grass, removing the mulch circles and fixing the planing job if they were planted in appropriately. I received a hundred white spiral tree protectors from the city forester last monday to put around the tree trunks. I have gone through about half of them cutting them in two to protect twice as many trees.

Today as I was attempting to fix a particularly bad planting job where a maple tree had been planted several inches too deep, I heard a squeek and the soil I had been carefully digging started moving. I thought I must have disturbed a meadow vole but then a pink snout pushed out of the ground. What ever it was, it was apparently digging its way out. I quickly got my camera out, to at least get a shot of the little guy's snout. As soon as he spied me he ducked back under again. But with a little coaxing and patience I eventually got the above picture of him just before he scooted away intoo the long grass.

The northern short tailed shrew is a small carnivore that eats insects, worms, mice and voles. They have a reputation as voracious eaters and are also noted as one of the few venomous mammals. Their venomous bite allows them to incapacitate larger prey such as voles. Since they are active throughout the year and are just about an ideal size to be able to use the meadow vole's runways under the snow, I imagine voles make up a significant portion of their winter diet.
Posted by dfg at 3:24 PM