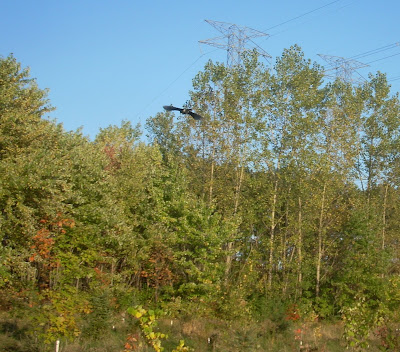 I was taking a picture of the trees when a blue jay flew over my head. Blue jays often travel in small family groups and as I had seen the one, I was not too surprised when I caught the second in frame.

This past Thanksgiving weekend has been warm and sunny and as you can see in the above picture many of the trees still have green leaves. We've had a frost, but not so hard a frost that it has killed the insect life. There are still grasshoppers in the long grass and there are still wasps hanging about. The other day I had to beat a quick retreat when I removed a mulch circle from a tree and realized there was an entrance to a wasp's nest underneath it. I don't see too many garden spiders about anymore though. In late August it is hard not to get tangled in their webs when walking in the tall grass, by late September they are quite rare.
Posted by dfg at 7:44 PM