A Leafroller on a maple 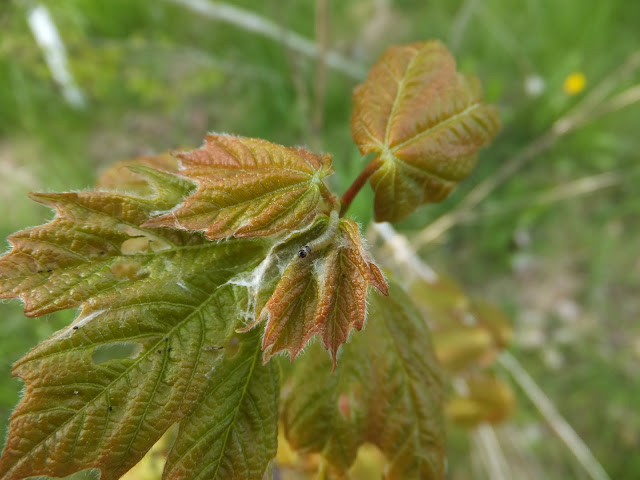 Once in a while I come across something new that leaves me amazed by the incredible complexity of the natural world. It happened to me again yesterday when I attempted to find out what the little green caterpillar on the above maple leaf might be called. When I got back home I fairly quickly identified it as a Leafroller(tortricidae family) because that is what I found it doing: binding leaves together with silk, but when I tried to be more specific I was stymied. I saw some photographs that looked fairly similar: a green body with a black shiny head with a black segment behind the head, but none of them had small black dots (presumably the spiracles) running the length of the body. I soon realized that even the bugguide.net which has pages and pages of species of ants or beetles has barely any photographs of the larvae of a family of small pale moths that numbers in the thousands.

Sure there are thousands of little grey nondescript moths but surely there aren't thousand in Ontario. When I tried to attack the problem by asking what leafrollers are common in Ontario, I cam across a fabulous pdf that lists ALL the insects that have been found in Ontario forests. It is just a big long alphabetical list of insects describing what they live on and with a single letter grading their economic importance. When I looked in the index I found 75 references to various types of leafrollers. There were even 3 different types of "maple" leafrollers although there is no guarantee that the one I saw was actually on its preferred host. At that point I decided to admit that I know nothing about moths and perhaps I should learn some general facts about leafrollers before attempting to find out about the particular species I encountered. To that end, I found the following link to be an interesting description of the habits of the obliquebanded leafroller and the damage it does to apple orchards.
Posted by dfg at 9:22 AM