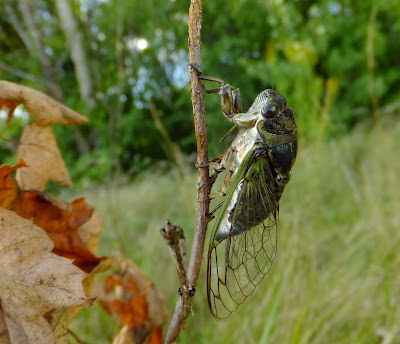 I've been listening to these guys make their loud electical buzzing sound for a while now. There has been at least one up in a tree somewhere in the backyard for the past few days. The one in the picture above is the first one I've spotted in the flesh. They're huge! At first I thought he was a dried up leaf. He was hanging on to a dried up maple tree in the 2011 planting area.

The 2011 planting area was hit hard by the drought in July. The drought is now over as it has cooled off and we have had rain on and off for the past week but the month long heat wave had already killed off many of the trees that had been attempting to comeback from last year. Some trees survived the drought better than others. The white pines were the most successful conifers. The hackberry, basswood, serviceberry and redbud did quite well, as did the suckering poplars. The maples and oaks in particular seemed to take the drought hard this year. This is the second difficult year for these trees and I'm not sure if they have enough viable buds to make another comeback next year. Maybe some of them will regenerate from the roots.
Posted by dfg at 6:01 PM