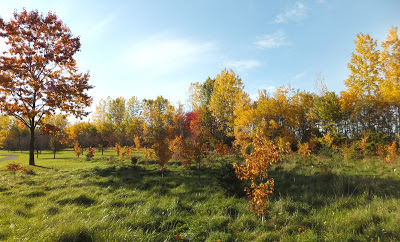 After four summers the 2009 trees actually have a few leaves this year to contribute to the fall colours. Perhaps in a couple of more years they will be more than just a few blobs of colour in a field of long green grass.

I've been pulling back the grass from the base of the trees again this fall but I haven't seen much evidence of voles. I don't really know if pulling the grass back from the trees is doing any good; perhaps there just aren't as many voles for some reason or perhaps the earth around the tree roots has compacted so much that it isn't a particularly desirable place for voles to make their home anymore( at least compared to the root balls of first year transplants).

I've noticed that the grass this year is easier to pull away from the trees than it has been in previous years. It seems less dense with fewer grass plants per square inch. Where in previous years I could grab so much grass in a handful that it would be physically hard to pull up, this year I can tear a handful out pretty easily. That is unless it is a fescue. A fescue is a course grass with wide rough-edged leaves that forms clumps. I'll invariably pull up a sod of earth if I grab a handful of fescue. I'm not sure which type of fescue it is but it looks pretty much like meadow fescue according to this linked identification guide. The other common grass I'm pulling away from the base of the trees is kentucky bluegrass. I can tell it is a bluegrass from the boat prow shaped tip of the grass blade. Kentucky bluegrass grows quickly in cool weather, and is one of the first grasses to develop seed heads in spring. It has a second growth spurt in the fall long after the seed heads have disappeared. The lush green grass in the above photograph is primarily due to the renewed growth of the bluegrass.

The third most common grass in the field is quack grass. It is a perennial and is forming several large patches. The fourth most common grass in the area also forms patches that persist from year to year. It is an as yet unidentified 7 foot tall perennial grass that looks a bit like a fescue. To round out the list of common grasses I've noticed, Timothy is quite common but doesn't form large clumps. I've also identified some meadow brome and orchard grass growing in the area but they don't seem to be very common.