Under the old oak tree 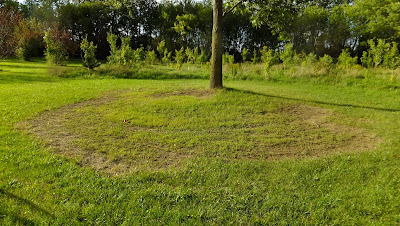 As you can see in the above picture, the grass grows very poorly under the oak tree. The red oak has created a semi-circle of bare earth where nothing much seems to grow. The problem isn't uniform; it is mostly on the south side of the tree, which also happens to be the downhill side of the tree. Even though this lawn area has full sun for much of the year, moss grows on the bare patches of earth. Most mosses like acidic soil so the tree is most likely somehow making the soil acidic. It is striking that it is only on one side of the tree. The mower prevents leaf litter from accumulating below the tree and what acorn, leaf and twig litter that does fall from the tree should equally impact the lawn on the north side of the tree where the grass looks healthy. Therefore I don't feel it is the organic matter added by the tree that is causing the soil to be acidic.

The bare earth semicircle is most pronounced around the drip line of the tree where the tree roots would be sucking the most moisture from the soil. An alternative theory is that it is a lack of moisture that is preventing the grass from growing on the sunnier side of the tree. A third theory is that the acidity comes from the rain dripping off the leaves and branches and running down the hill. The bare patch close to the trunk might also be explained by this theory since the rain water hitting the west side of the trunk would tend to leach into the soil right where the bare patch is: down-slope from the west side of the base of the trunk. Perhaps both theories are contributing factors and it is a combination of acidity and dryness that prevents the grass from growing on the south side of the tree. 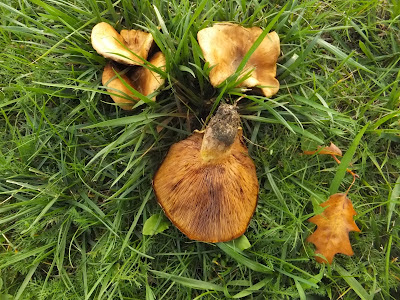 On the north east side of the oak tree where the grass is greener there is a whole bed of large brown mushrooms poking out of the grass. They grow to about 4-5 inches wide. They initially are paler than in the above photograph and have a pronounced rolled rim. I don't know much about mushrooms but after looking at various guides and searching on the web I'm fairly confident I've correctly identified these mushrooms as the common generalist fungi: Paxillus involutus. This is a deadly mushroom that was considered edible until a German mycologist ate one too many plates of them. It seems that after multiple exposures these mushrooms can trigger an immune response that causes your body to attack its own red blood cells.