Last fly of the year 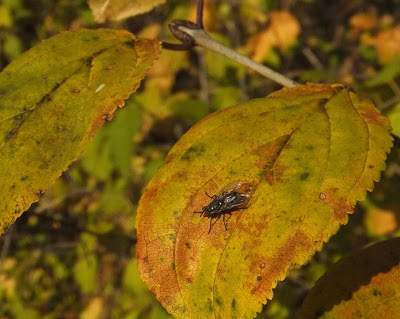 It was a nice cool sunny November day today when I visited the roadside berm. This fly, here sunning himself on a buckthorn leaf, was the only bug I saw. I expect he'll be the last fly I'll see this year. 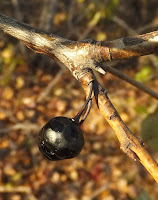 The leaves are mostly off all the trees revealing the under-story of european buckthorn that keep their leaves much later than most other trees or bushes. In the above picture you can see the modest little thorn bracketed by the two terminal buds of the buckthorn twig. Next year the buds will branch out leaving a small thorn at the crotch of the branch. In the picture to the right you can see the small thorn at the crotch plus a couple of the juicy black berries that are an easy way to identify the bush. Not every bush will have berries, so the thorns at the end of twigs are a better winter marker for this invasive bush. In the summer the upsweeping veins on the leaves are an easy identifying feature. The only other tree I know that has similar leaves is an apple tree. In the 2009 area there are a couple of volunteer seedlings that look a bit like european buckthorn. One is indeed european buckthorn (see below) but the other is an apple seedling. 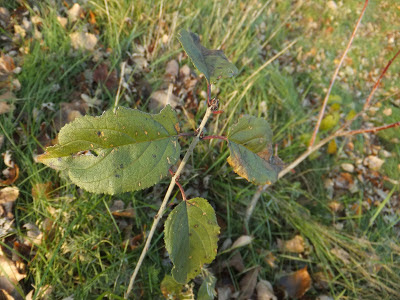