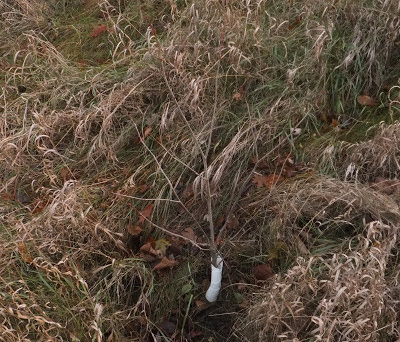 The first snowfall of the season fell yesterday. Late November, before the snow flies, is a pretty dreary season and the insect photography opportunities are quite limited. The one bug I have been seeing lately are mosquito like insects hovering around small trees and bushes. As late as last Thursday I saw one hovering around this basswood. More often there are a whole bunch of them bobbing up and down in a little cloud. From what I've read on the internet what I was likely seeing were male midges trying to find a mate.

Midges are a new insect for me. I had always thought that midge was just a generic term for small annoying flying insects, now, thanks to the internet, I have learned they are a family of insects (Chironomidae) that resemble mosquitoes but don't bite. They are very common; large swarms of males are often seen hovering over or just to one side of a bush or tree limb. They spend most of their life as aquatic larvae; the adults don't eat but only live long enough to mate and lay eggs. Finding midges in November isn't surprising as many midges species are cold tolerant; some will even appear in winter to mate. That is an amazing strategy to avoid predators; just appear once the predators have all either died off or have gone into hibernation. It also probably makes it easier to find a mate in the brief time they have before they die.