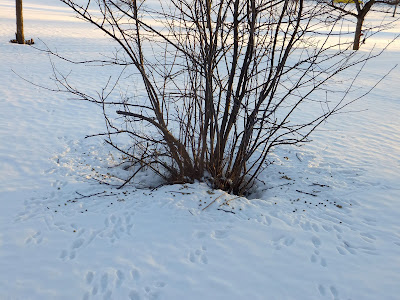 The temperatures plunged this week from above freezing on the weekend down to around -30C. This with a dusting of new snow made it an excellent time to go looking for tracks on the berm. There were a whole load of fresh crow tracks in among the 95 trees. It must have been a whole flock of them giving the forest a good picking over. There were also a few rabbit tracks.

The picture above shows heavy browsing on an apple tree by a rabbit. This apple tree is rather bushy because it is just the regrowth from the root stock after a crabapple tree fell down a couple of years ago. I find it incredible the number of pellets he produced. The snow fell a couple of days ago so this pile is just from the past two days. I followed the tracks of another rabbit through the woods and he also was passing a huge number of pellets. Every few feet along his track there would be another pellet. And it was clear this was just one rabbit; the track was wandering around so much it couldn't be the pellets on a rabbit run poking out of the snow. It is purely my speculation, but I believe the rabbit I was following wasn't actually feeding but was just out in the cold -20C degree weather to pass scat and would have quickly returned to his burrow afterwards. I located his burrow to be an old groundhog hole (in center of picture below) under a glossy buckthorn bush by the eastern path over the berm. Cottontails don't make their own holes but they aren't above using one if there is one available. 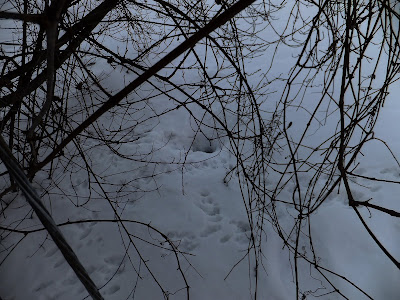 Last year there were hardly any rabbits overwintering on the berm. This year there seems to be at least two: one on the east side living in the old groundhog hole and another living along the fence behind Kelvin that occasionally visits the crabapple trees.