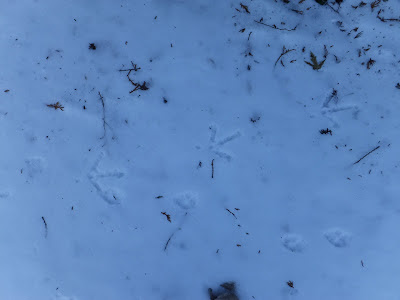 There is no mistaking the evidence that wild turkeys visited the berm area in the past couple of days. In the image below you can compare the turkey track with the smaller tracks of a crow. Their tracks in the snow are at least twice as wide as a crow's and it is easy to see the individual toe marks.

I have very rarely seen a turkey fly as they mostly get around by walking. I followed the tracks of the one that landed below as he walked with his friend along the berm from the 2009 planting to the 2010 planting. I wonder if they continued on and visited Ben Franklin Wood. 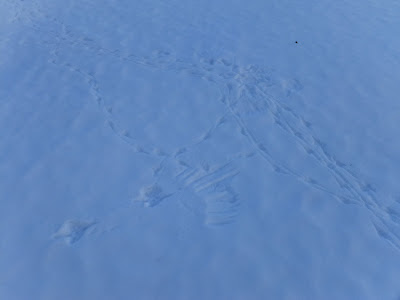 This is the first time I've seen wild turkey tracks in Manordale. Wild turkeys were only introduced to eastern Ontario about 20 years ago and Ottawa about 12 years ago. This area is north of their historic range but they have been very successful so far.