The abrupt end of one meadow vole.

More snow today. We have had quite a lot of snow this winter which makes a change from the last two winters. One unfortunate side effect of deep snow is that the white plastic spirals that protect the trees from the meadow voles aren't as effective. In the below photo you can see a meadow vole has almost completely girdled a maple tree just above where the plastic spiral stopped. A warm spell in January had given a hard crust to the snow, then a later snowfall gave the voles something to tunnel through at this new surface. This photograph was taken at the end of January when another warm spell revealed their pathways. Some of them were only market out by the dirt from their feces. In the photo below the dark specks of dirt on the snow around the trunk are feces from the meadow vole. 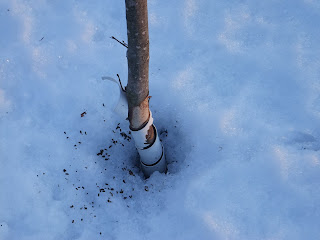 Not too far from this tree I spotted tracks that told a very clear story in my mind. In the first photo below you can see the tracks of a meadow vole as it was hopping over a fresh sprinkling of snow past a few grass stalks poking out of the snow. Suddenly its tracks stop at a place where there are a whole mess of confusing tracks. Looking more carefully in the second photo below there are a few specks of bright red. Somebody caught the poor guy and whoever caught it must have flown there. You can see what are clearly the mark of the bird's broad tail and the marks of its feet. About 10 feet from this spot in the third photograph are the marks of a large bird's tail as it brushed the snow. The story that comes to me is of a meadow vole scampering along in the dark over the fresh fallen snow when an owl perched 50m away in the bushes spots it. It launches itself and glides in low over the snow. It caught the vole before the little guy even knew it was there and dispatched him on the spot before taking off to feed at a more secure location. I would bet the bird was an owl as a vole is quite unlikely to be out in the open like that except at night, the most likely candidate being a Barred Owl as I know they are about because I saw one this winter in the Stoney Swamp. 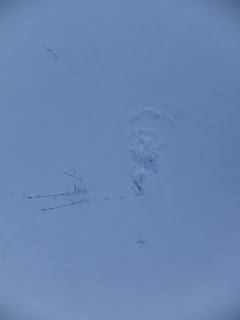 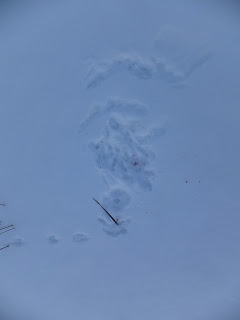 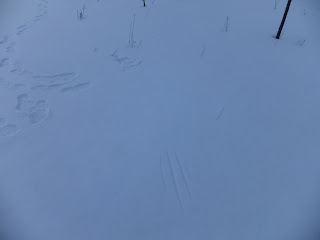 As a bonus, here is a Youtube video of a meadow vole behaving quite strangely in broad daylight. This isn't my video but I saw a meadow vole behave like this several years ago on the berm. It just rested in broad daylight on top of the snow as I passed quite close by on my skis. I didn't have my camera with me that day or else I would have had plenty of opportunity to get a good closeup of the fellow.