I saw my first insect yesterday, some sort of flying insect, a midge perhaps. The temperature was hovering around zero and the ground is still snow covered yet the insects are stirring. The birds know spring is around the corner too. I saw my first red-wing blackbirds on the 12th staking out claims in the bushes across the road. I haven't seen a robin yet, perhaps the snow is still too deep. It will take quite some time to melt the snow pack this year. A couple of weeks ago on the 12th when the last warm spell attempted to make a dent in the snow banks, it formed a large puddle over the bike path. 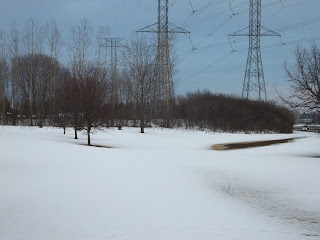