There are three common clovers along the average roadside. White clover is the common clover in mowed grass with white flowers and a white chevron on the leaflets. Red clover which to my eyes really has purple flowers is much larger and grows in unmowed areas and verges. the leaflets of red clover is more diamond shape and a more irregular blotch in place of the clear chevron of white clover. The third clover is called Alsike clover, but I think of it just as pink clover as its flowers are pink. It also grows best in unmowed areas but it isn't as large as red clover. Its leaflets do not have a white mark on them 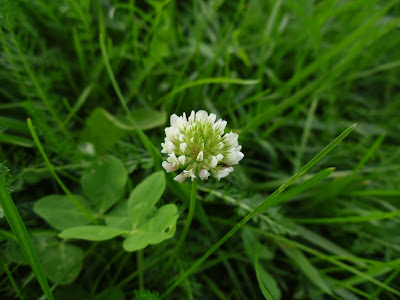 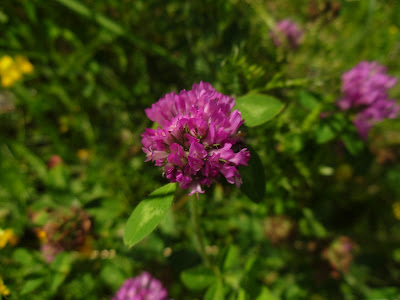 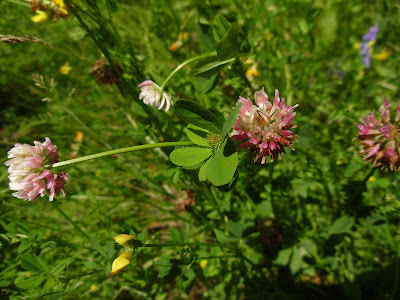 
The roadside test-plots look to be testing Alsike clover as a roadside ground cover. Currently the area is left unmowed and many of the test-plots are rather weedy. The plots really look like a bit of a mess with a load of weedy flowers growing up to man height and some of the clover is turning brown. Perhaps some of the particulary weedy plots are control test plots. The nicest bit of the test plots are along the edge of the test-plots where the unmowed yarrow is blooming and smells like honey. In the picture below the honey bee is really appreciating the banquet the test plot is providing. 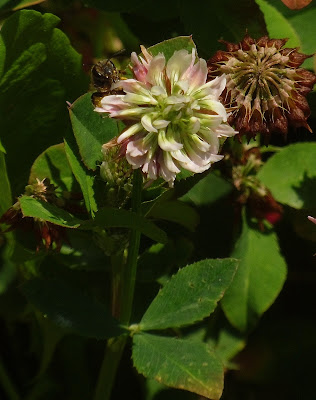