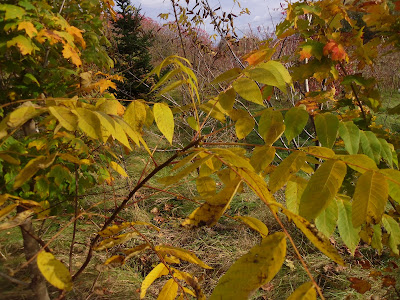 I went for a walk on the berm last Thursday and found a new tree seedling I hadn't noticed before. It superficially looks like a small sumac but I believe, after consulting my tree ID book, that this is actually a Black Walnut sapling. Where the nut came from is a bit of a mystery as the closest walnut tree I know of is at the corner of Cox and Majestic. I did recently find a new walnut nut in the long grass of the 2009 planting area so they get there one way or another. Perhaps a squirrel relay team was involved. I acted the squirrel and properly buried the nut I found. 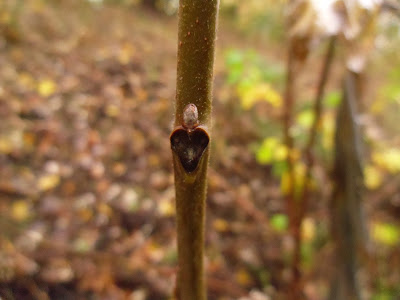 The heart shape leaf scar and fuzzy bud in the above picture along with the long pinnately compound leaves lead me to identify this as a black walnut however when I compared the leaflet to a leaflet from the black walnut on Majestic the sapling's leaflet is significantly larger. 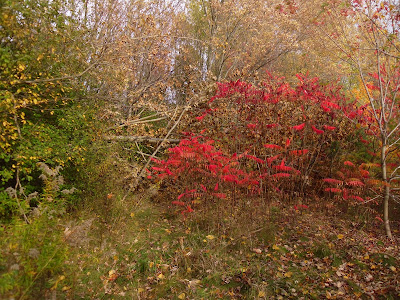 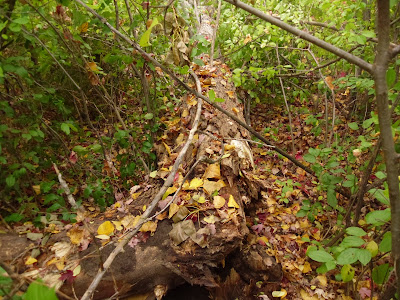 Coming back along the berm I noticed one of the large cottonwood poplars planted on the top of the berm in 1995 has recently fallen down. It is quite an impressively large tree for just 22 years of growth. It was 85 feet high. Its trunk lies completely across the width of the 1995 planting area with the canopy lying in the 2009 planting area. Its fall took out a couple of understory trees in the 1995 area but most of the damage in the 2009 area is on the sumac which will recover.