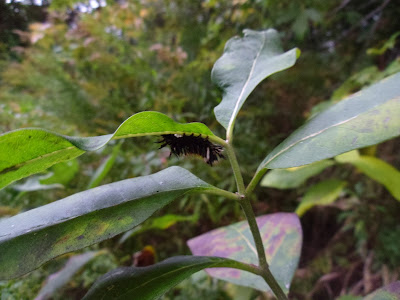 This story begins by my house earlier this summer when I noticed a bunch of tiny fuzy caterpillars munching away on the leaves of a milkweed growing under the lilac. Every once in a while I checked how they were doing and eventually they completely consumed the first plant and started on its neighbour. By then they were big enough to be identifiable as Milkweed Tussock Moth caterpillars and I started worrying that they were going to consume the entire milkweed patch. One day in late August I noticed there were only three left on the last leaf of the milkweed patch. I decided to make an intervention and took the three out to the roadside berm area where I new there was another milkweed patch. The next day I noticed a couple more caterpillars wandering around looking for food so I decided to take them over to their brothers on the berm. To my horror when I got to the milkweed patch one of their brothers that I had left there the day before was being consumed by three shield bugs and more shield bugs were on the prowl around the milkweed. I couldn't leave my new charges there so I was the new not-so-willing owner of two Milkweed Tussock caterpillars. I stuffed fresh milkweed leaves in the box and in a few hours the pair had consumed half a leaf. Over the next few days I stuffed fresh leaves in to be turned into caterpillar poop but eventually noticed the new leaves weren't being touched so I checked for my charges and found one had already formed a fuzy little cocoon. I took the contents of the box and left it where the milkweed patch was under the lilac in hopes that maybe a moth or two will emerge next spring.

I had never noticed these caterpillars before and had previously always assumed that only Monarch caterpillars ate milkweed leaves. I don't think I've ever spotted a Monarch caterpillar on a milkweed but I keep on looking in hopes of spotting one one day. This was a relatively good year for monarch butterflies I think. I saw way more this year than I had in the previous two years. This might have been a good year for Milkweed Tussock Moths as well, as I've spotted a couple more caterpillars on different milkweed patches along the berm. 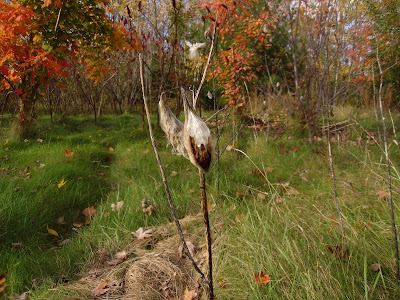 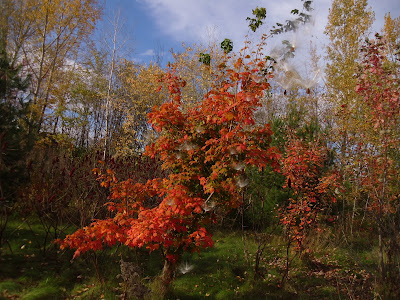 Last Thursday I visited the berm and noticed that the milkweed pods were opened and spreading their seeds in the wind. I never noticed before what time of year the pods opened.