The meadow voles did a real number on the trees planted last year. There are signs of their runways and burrows all over the long grass between the trees. Many of the trees were killed by the rodents eating their bark either just below ground or at ground level. The bushes were extensively eaten as were the oaks and the sugar maples. The trees that survived the best were pine, spruce, tamarack, red maple and sumac. I guess those trees don't taste very good to voles.

The runways the meadow voles made under the snow cover the square planted on the south side of berm last year. The north side of the berm fared better. My hypothesis is that this is due to the type of vegetation growing. On the south side a lawn that has been regularly mowed was allowed to grow wild. This produced a very pretty mix of clover, chickweed, vetch, birdsfoot trefoil and grasses. In places the trefoil and clover made a dense mat underwhich rodents could safely go about their business away from flying predator's eyes. On the north side of the berm the slope had been mowed once a year and the area was a well established field with tall grasses. There was rodent damage evident here as well but not nearly as extensively and the runways were not as well packed. 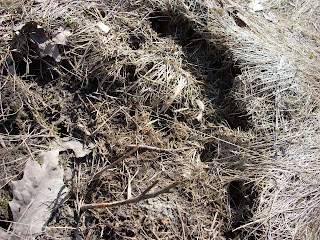 The meadow vole runways are about the width of two fingers. They sometimes end in larger chambers under the snow, sometimes they end in a hole leading underground. Note the bush that has been stripped at the bottom of the picture. 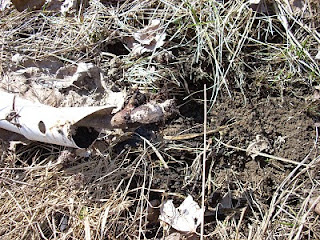