Witch's broom on the oak tree

In 1995 a single oak tree was planted in the triangle area along with a couple of dozen crabapple trees. These trees have had to put up with the mowers and the pollution from the road. Some of the crabapples have perished leaving gaps in the grid pattern in which they were planted. Others have suckers growing up from the base which is I believe a sign that the tree is under stress. The single oak tree has survived, and as it was more mature when it was planted it is now the most prominent tree in the area. The tree has to contend with the salt from the road and it is always very late in leafing out. The limbs on the bottom half of the tree have a growth pattern named witches broom where multiple small branches or twigs all come from the same spot on a larger branch. The upper part of the tree has a much more natural growth pattern where the limbs become progressively smaller out to the last twig(see picture). This is probably due to the salt damage from the road. 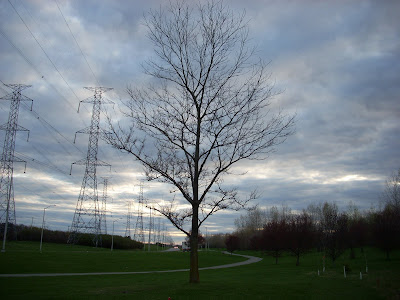 The oak tree before the leaves appear. The lower branches have the appearance of witch's broom while the upper branches appear to have a natural growth pattern.