Winter Cress and a Flicker

The Winter Cress (or Yellow Rocket) is starting to flower. These plants grow very quickly in the spring and their heads are now well above the level of the grass from which they sprang. They are found along the border of the forest where the grass is cut only in the fall. According to the books the plant is a biannual that only flowers in the second year. Presumably they have spent all of last year storing up energy for this fast growth spurt this spring. The plant is part of the mustard family with small flowers flowering from a spike with each flower having four petals. 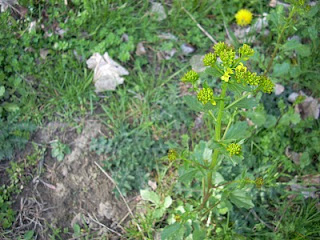 The winter cress is the yellow flower on focus. Out of focus below it is a baby bull thistle plant

While inspecting the spruce seedlings on the north slope I heard a rustling in the leaves in the woods on top of the berm. I figured it was one of the squirrels I had seen earlier until I got closer and a large bird flew up into the branches. I initially thought it was a mourning dove but then I saw a red patch on the back of its head. It was a type of woodpecker called a Common Flicker, they are noted for being the only type of woodpecker that commonly hunts for insects on the ground which is presumably what I heard it doing. It would of been very strange behaviour for a dove but exactly what you might expect from a flicker.