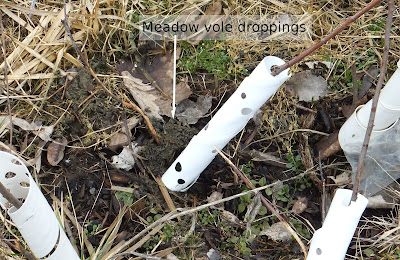 The snow has disappeared from the south side of the berm revealing the meadow vole runways and the damage they did to the trees. The damage in general doesn't look too bad, the most damage was in the bushy area. Several bushes, particularly serviceberry bushes were attacked. The meadow voles evidently spend a significant amount of time at their feeding because they leave a considerable pile of droppings below every bush that is damaged (see above).

I planted groups of 4 serviceberry bushes last year instead of planting them separately. This was in hopes that the meadow voles would either spread the damage between the plants or that the voles would be satisfied with only some of the canes and leave the others. That is sort of a herd strategy where the plants find safety in numbers. Voles are said to be territorial, therefore planting the bushes in a group means that only one group of voles would attack the bushes whereas if each plant was planted separately each one would be in a separate group's territory and, since serviceberry is a favorite food, likely heavily damaged by the voles of that territory. I also was careful to wrap the plastic spirals around the best branches, although as the first year proved that isn't always effective since voles will dig down and attack the roots. It looks like we may have some of the bushes survive, but it is too early to tell how much damage was done to their roots.
Posted by dfg at 9:08 PM