It is really starting to look like spring out there, at least on the south side of the berm. I even saw some small spiders crawling over the grass yesterday. I've been meaning to make a post on squirrel tracks in snow similar to the rabbit tracks post but I held off in hopes of getting a picture of a squirrel actually visiting the berm area. Frustratingly the squirrels haven't obliged. So before spring gets much further here is a picture I took earlier this winter of a squirrel's track he left as he hopped through a fresh dusting of snow. 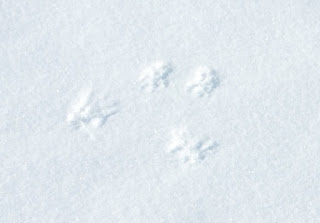 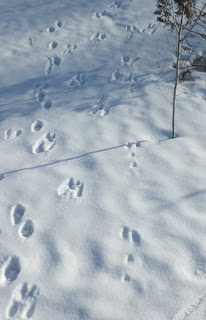 Here is a photo I took last week of the north side of the berm. It is still winter on the north side and you can see the tracks of a dog, a squirrel and a rabbit running up and down the berm. You can clearly see the tracks the rabbit made as it ran up the hill (on the right). It puts its front paws one after another. The middle tracks are from the squirrel as it hopped through the fresh snow. The squirrel planted its front feet beside each other as it bounded over the snow. The tracks of the back feet are almost on top of the front feet prints leaving a much more compact set of tracks.

There haven't been that many squirrel tracks on the berm behind Kelvin this winter. There isn't much to eat except a few crabapples and I suspect the squirrels are mostly hanging out in backyards getting a free lunch at a bird feeder. I've been on the lookout for a squirrel or squirrel tracks along the berm for over a month, ever since I found squirrel remains where some predator caught himself a meal. There haven't been any squirrel sightings and few tracks. I've concluded that squirrels have been only infrequent visitors to the berm area. Rabbits have visited even less frequently, the above tracks being the first I've noticed heading towards the top of the berm in a long while.
Posted by dfg at 9:02 PM