A redwing in the poplars 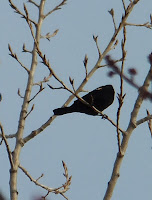 Today was the first really warm day in over a week and the snow was melting fast. Walking along I was on the look out for a redwing blackbird. I heard this fellow before I spotted him high up at the top of a poplar. It isn't the best picture because he was so high up. The eastern cottonwood poplar trees from the 1995 planting are amazingly tall trees now just 17 years after they were planted. Last summer a wind storm knocked a few of them down, and the year before a dead trunk fell down into the 2009 planting area. Perhaps in another 17 years the current giants will no longer be here. They don't seem to be a very vigorous suckering plant. There is one sucker growing in the 2009 planting square, and another in the 2010 west side area. There are loads more suckers of the other species of poplar invading the 2010 and 2011 planting areas. I believe those poplars are trembling aspens. On the 2010 west side and in the 2011 planting area past Newhaven, the aspens are sprouting up so quickly and densely that they are liable to crowd out the new maples if I am not careful. These aspens sucker vigorously but the parent trees in the 1995 planting area are only half as big as the Eastern Cottonwoods growing beside them.

Actually, I'm not certain that the larger poplars are true eastern cottonwood poplars. I suspect they are a hybrid commercial variety that has been selected for its vigorous growth. Eastern cottonwoods are not native this far north being more a tree of the Carolinian forest.(Poplar identification, pdf with more details). The trees do carpet the ground beneath them with masses of cottony fluff when they disperse their seeds in summertime though, so I will continue calling them cottonwoods.
Posted by dfg at 4:46 PM