Critters in the litter 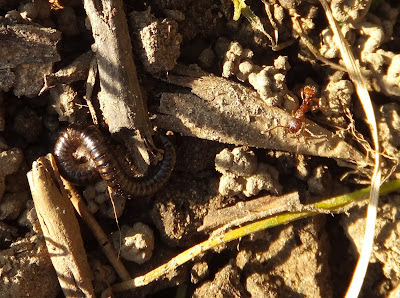 I was uncovering a few baby plants the other day and decided to see how my camera did taking close-ups of insects. Here is a closeup of a small millipede and an ant just hanging out under the old leaves. The camera doesn't do quite a good enough job to identify the little guys but here is my best attempt. (You can see the image in greater detail by clicking on it)

The ant looks like a European fire ant (Myrmica rubra). This is a surprising result as I haven't heard much about european fire ants in Ottawa and as their name implies they are an invasive species, who have a reputation for being aggressive and having a powerful sting. There are native Myrmica species that it could be although they are not considered common in disturbed environments such as this naturalization area. I haven't been stung and haven't encountered any aggressive ants so if another candidate fit the image I would choose that based on lack of identifying behaviour.

The structural details that makes me think it is a fire ant are the following: the two lobed petiole (waiste) which is common to the myrmicinae, the two prominent spikes on the propodeum, the grooved rugged aspect of the head and alitrunk (thorax), the smooth and hairy gaster (abdomen), the dark red color, the large clypeus. An alternative ID is that this is a particularly red pavement ant (Tetramorium species-e). This is another introduced species that is you common black ant on your sidewalk. It also has the same basic body format although the large clypeus is missing as well as the prominent spikes. Another possibility is that it is one of the Spine-waisted Ants (Aphaenogaster)

The millipede is probably also another invasive Cylindroiulus caeruleocinctus It is one of the most common millipedes in Ontario There is a similar looking native species in the parajulidae family but the photograph is not good enough to conclusively tell them apart. The non-native is supposed to have longitudinal striations but the resolution can't quite make them out.

It's incredible the number of invasive plants and animals in this roadside environment. It feels like most of the common things you see are all invasives.

In Bloom:
Dandelion (first of season April 7)
Scilla (escapee)
Posted by dfg at 11:42 AM