Crows roosting along the Rideau 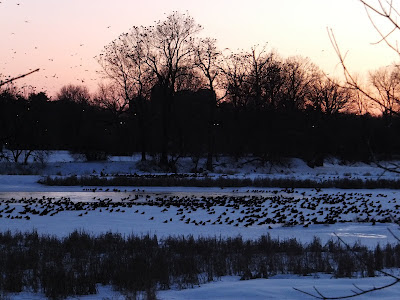 Last Sunday I was in my car driving along Hunt Club about 5 o'clock when I noticed the stream of crows flying directly over. I took the opportunity to see if I could find out where they were going. It wasn't too hard to follow them as the old saying "as the crow flies" has a great deal of truth. They followed HuntClub to past Merivale Road and then continued on over Collonade to the Rideau river. I lost them for a bit as I had to go up to Hog's Back to cross the river, but I found them soon enough over Vincent Massey Park. I followed them up Riverside drive and noticed quite a few crows in the trees along the river past Bronson. When I got to Bank I saw a flock heading west back towards the trees along the river so I figure there must be more than one crow skyway back to the roost each evening. When I eventually parked on the northside of the river and got out of my car, my ears were assaulted with a great racket from the crows over head. There were also hundreds of crows out on the ice of the river. I took a few snaps, but you couldn't get the entire roost in one picture. The above picture doesn't include the crows on the main roosting trees where they were almost as densely packet as leaves in summer.
Posted by dfg at 3:00 PM