Where are the winter rabbits?

I went for a walk today to see if I could find some rabbit tracks along the Hunt Club berm. I was quite surprised to find that except for close to the cedar hedge by Kimdale street there aren't any rabbit tracks visible along the berm east of Newhaven. There are some squirrel tracks but no rabbit trails. Rabbits often follow specific paths and it is interesting that no rabbits have chosen to live this winter along the berm. There are rabbit trails in the bushy area to the east of Kimdale. 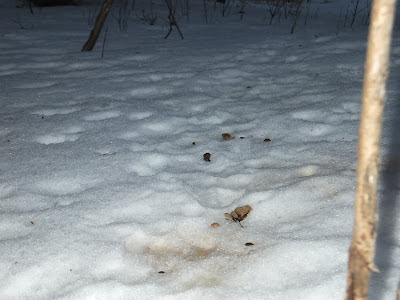 Above is a picture of a rabbit trail among the cedars to the east of Kimdale. In the first picture the rabbit trail goes up and to the right in the picture. You can see some discoloration in the snow due to rabbit pee and a few rabbit pellets along the trail. You can't make out any particular rabbit tracks as the trail is so heavily used. 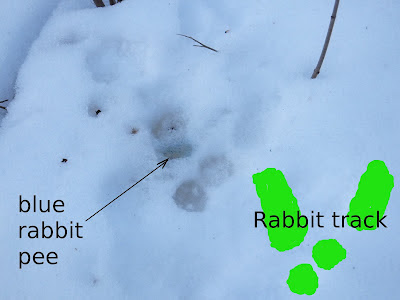 In the second picture above is a single rabbit track. Squirrel and rabbit tracks are very similar when viewed in isolation. The context of it being on a clear rabbit trail in association with rabbit pellets makes it very likely to be a rabbit track. In addition, rabbits tend to put their front paws one in front of the other parallel to the direction of travel while squirrels tend to put their front paws beside each other. In the above picture the rabbit was traveling away from the camera. When a rabbit is moving it puts its back feet down in front of where it planted its front feet.

One interesting thing about the second picture is the blue rabbit pee in the left paw print. According to the following link the blue pee is due to the rabbits eating buckthorn bushes.
Posted by dfg at 5:54 PM