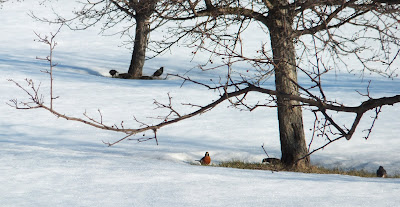 It was a nice warm sunny day for a walk along the berm today and the snow has melted away from the base of the trees on the south side of the berm. The bare ground has attracted a flock of about 30 starlings and a bunch of robins as well. I can't say that these are the first robins I've seen this spring because there has been a miserable looking robin hanging out in the crab apple tree by our house for weeks now but this was certainly the first flock of happy robins this year. 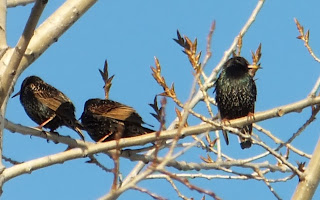 Starlings are considered a pest because they are an introduced species but I rather like them. They have lovely songs and are quite pretty with their yellow beaks and iridescent plumage. I don't see as large flocks of starlings in recent years as I once did, so I rather feel they haven't over populated their niche. I don't know what native ground foraging birds they might be directly competing with other than robins and grackles who seem to be holding their own. 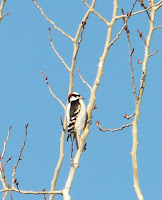 I also spied a downy woodpecker hanging out at the top of the populars. They stay all winter in Ottawa but it is the first I've seen along the berm this winter. I wouldn't have expected the top of a popular tree to be very productive hunting grounds for a woodpecker but I expect it knows what it's doing.
Posted by dfg at 1:43 PM