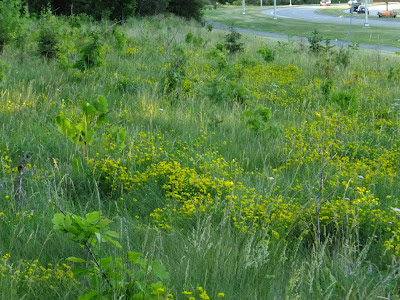 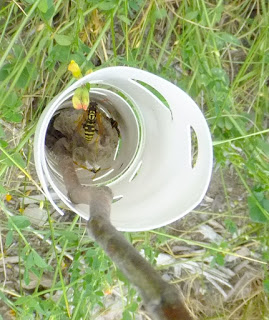 The bird's-foot trefoil is flowering all over the 2011 planting area. As I've noted in the other planting areas, the trefoil forms large tangled mats the second year after the lawn is left uncut. It can crowd out other plants for a year but it doesn't maintain its ascendancy for more than a year. The grasses come back in the third year and other plant's that can't withstand cutting start establishing themselves.

The wasp queen's nest I visited in May is somewhere in the middle background of the above photograph. She now has about a half dozen daughter's helping her take care of the hive. I'm sure they appreciate the bountiful supply of nectar flowering all around them.

Appropriately for the end of June, there have been plenty of June bugs flying around at dusk. They like to hover and fly around the tree branches. I'm not sure why they do it, but presumably it has something to do with attracting a mate. I imagine the bats that come out when it is darker pick off many of the June bugs as they slowly fly around.
Posted by dfg at 2:47 PM