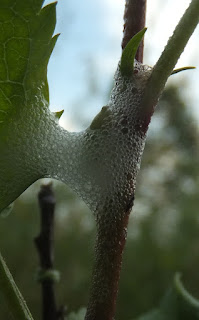 The reason why I blog about this mundane bit of roadside greenery that most people pass by at 100km an hour, is because it pushes me to get out and learn something new. It is so easy to just walk along without noticing the living world around you. Today I decided it was high time I finally found out what causes those little globs of sticky foam that are commonly found on the stems of plants. It didn't take long to discover there was a squat little bug living inside the foam. In the picture to the right, what looks like a green bud poking out of the foam, is actually the tail end of the little creature responsible for all that sticky mess. This, I later learned, was a nymph of a spittlebug. They feed on the sap of the plant and produce this sticky foam with the excess fluids they pass. Predatory insects can't get at them inside this foam and they are left at relative peace to suck the sap from the plant. 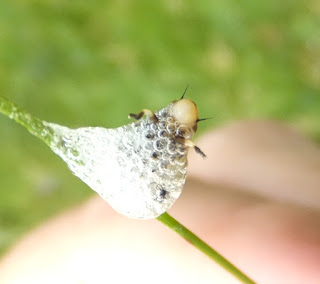 To get a better picture of one of them I took a blade of grass and scooped off a bit of the foam from a nearby basswood. It turns out that this guy was a nymph from a different species and wasn't green like the first guy. According to the book: Spittlebugs of Canada (pdf), there are many different types of spittlebugs, each tending to specialize on specific host plants. So it isn't too surprising that neighbouring plants have different spittlebugs. As you can see on the right, the little guy wasn't too happy with being disturbed. I eventually put him back down on his basswood so that he can go back to his sedentary occupation of sucking sap and blowing bubbles.