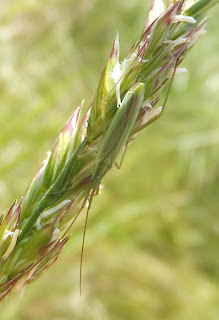 This little bug hanging out on a grass seed panicle is a Megaloceroea Recticornis. It is an import from Europe hanging out on another import from the old world: a tall fescue. It is amazing how foreign this common roadside environment is; practically all the grasses are non-natives, and when I attempt to identify a bug or insect it often turns out to be a non-native as well. I suppose it makes sense that the non-native bugs would do well among these alien plants. The one to the right already has the elaborate camouflage to mimic a green grass spikelet. They probably are well suited to this grassy environment in many less obvious ways, such as their digestive system and the timing of their life cycle. 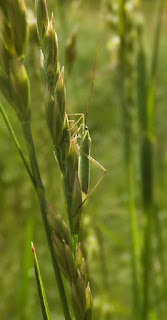 To the left is a photograph of another Megaloceroea Recticornis. You can see its feed tube through which it is sucking up the grass's juices from the spikelet. These insects can only feed while the seeds are still green and growing. The bluegrass which is the most common grass in the naturalization area has already turned brown. This has probably concentrated the remaining grass feeding insects onto the green fescue and the timothy. The insects are particularly easy to spot on the tall compact spikes of the timothy. Right now it seems like every timothy panicle has a variety of plant bugs crawling all over it.

Megaloceroea Recticornis is named for its large straight antenna. Antenna are sensory organs for insects that they may use to smell or feel, but somehow I don't think those conventional uses are the reason these antenna are so large. These insects don't have to hunt for their food as grass seeds aren't hard to find. Because the antenna are so rigid and over-sized they must make navigating among the grass stems a pain. Perhaps the antenna have more in common with deer antlers than the superficial similarity the name implies.
Posted by dfg at 1:01 AM